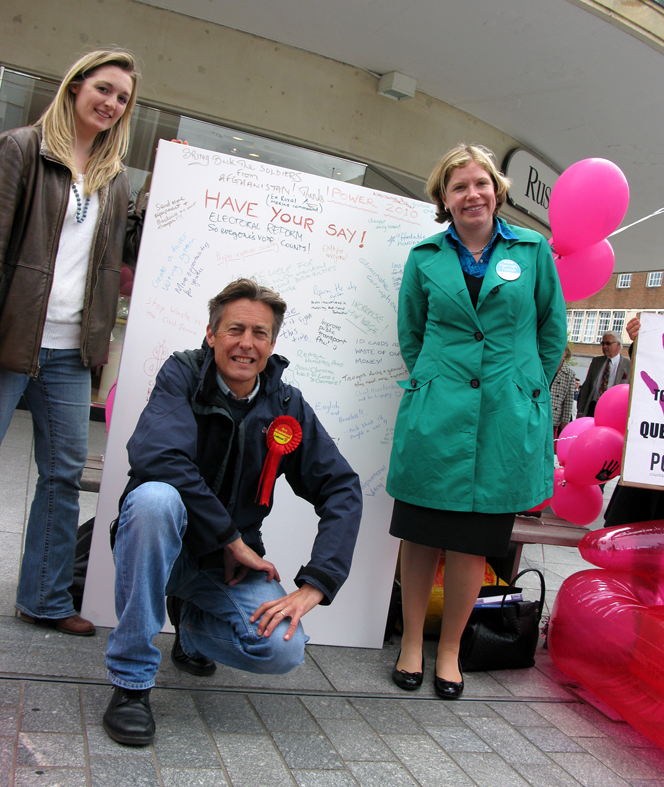 Blowing Up Politics in the 21st Century – Plymouth and Exeter

In my first week collecting signatures and canvassing opinion for Power2010, I was struck by the levels of disillusionment with politicians. Asked whether they wanted to help clean up politics, a common response was “Guy Fawkes had it right!”

The challenge Power2010 has faced has been to convert this negative energy into something much more constructive: an open and expressive dialogue between party candidates and local constituents.

To this end, our ‘Blow-up Politics’ events seem to have struck a chord with local people in population centres like Plymouth and Exeter, by combining the public nature of a hustings with the individual directness of a constituency surgery.

It comes across as radical and perhaps a bit un-British to turn up in city centres with pink inflatable sofas, but it doesn’t take long for the ice to be broken and for people to use this unique medium to air their views to future MPs.

Credit is due to the many candidates of all stripes who have readily attended our events, with many being the last to leave! The candidates have engaged in lively debates with each other and the public, particularly regarding the points on the Power Pledge, and it is encouraging to think that these outside debates will continue to rage in committees and offices inside the new Parliament.

Events like these have reminded me that democracy is about so much more than just elections. It is about accountability, dialogue and transparency, all ideals that Power2010 fights for.

The outrage over the Expenses Scandal would all have been in vain if it had not been translated into a productive movement for change. But thanks to campaigns like Power2010, building from the ground up with events like ‘Blow Up Politics’, 2010 will be seen as the year that the people started to take back the power, regardless of the results this Thursday.